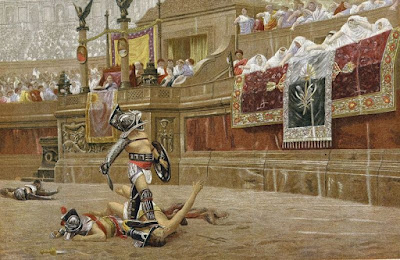 So, I've looked through various rules, books and the Internet for as much information as possible about the various types of gladiator, their fighting styles, armour, equipment, weapons and so on.
It didn't come as much of a surprise to me to find that there was so much information out there, but what was surprising was that there was so little of it definitive.
For example, there are many references to types of Gladiators mentioned in texts only briefly, that have no illustrations, or conversely there are illustrations of Gladiators that have no text references.
I also discovered a lot of information that I'd never have considered had I not done a minimal amount of research. as an example, take the well known figure of the Retiarius (the guy with the net and trident), he was a late addition to the gladiator family, added sometime in the first century AD - about 300 years (give  or take) after the start of the gladiatorial combat.

Rule books seem to love all these different types (who doesn't like variety after all ?), but mostly what they come up with for their definitions of type or fighting styles etc. seems to me now merely conjecture. It is also apparent that different sources have their own ideas on the various Gladiators too- whilst one reference gives "Andabatae" (restricted sight gladiators or completely blind) as riding at each other another won't. There is also evidence that there were "Essedarii" or gladiators that fought from chariots and many rule-sets include them, but there is no definitive evidence to be found in any of my reading as to how they actually went about being used in the arena. Similarly one reference states that they were Celtic chariots used by the Gauls and can't remember the latter ever using chariots against the Romans, even with my limited knowledge of matters ancient.

There are of course Gladiators that we know a lot about, that provide continuation throughout all the games held in the arena - about eight in total, but there are a lot more that have no more than passing mentions.
Here's a list of those I've come across.

It's also apparent that there is repeated confusion. The "fish man" (the Myrmidon) wasn't the obvious opponent for the "net-man" (the Retiarius) - that was the secutor by many accounts.
The term "Samnite" was probably dropped in favour of more recent opponents of the Romans (maybe the "Thracian" or "Thraex"), as the term "Samnite" isn't found later in the records. (Hardly surprising as the Gladiator games lasted for over 700 years!

As for my games, I will of course being using as many different types as possible (for variety) and
justifying them in my own mind. 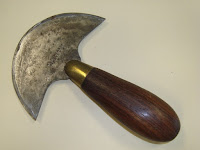 As an example of this, I think The Contra-retarius is a generic name for many of the stranger "gladiators". So, taking the examples of the "Hook Fighter", "Scissors" and "Arbelas", rather than have these three different ones, I'll just use Contra-retarus to encompass all three.
Something I came across recently also made me think, the 'weapon' depicted as being used by the "Arbelas" closely resembles a saddlemaker's knife - just saying. I haven't actually come across any other reference that mentions this, but I found it interesting.

Next week I'll be posting about arenas and other things I've done recently; this will also be the first post I haven't pre-written since preparing the first six before April !
Posted by Zabadak at 04:08