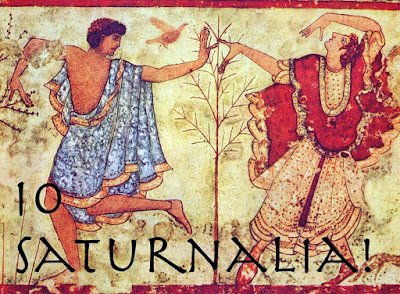 Once more the festive season of Saturnalia is upon us and whilst I won't be slaughtering any animals (either in the arena or on an altar) I will of course be upholding the great Saturnalia traditions of feasting, goodwill, generosity to the poor (my kids and grandchildren), the exchange of gifts and the decoration of trees - for these all occurred too during this festival, along with similar traditions in Mithraism and the Winter Solstice traditions of many other pagan  festivities.


So however you celebrate (if indeed you do), I hope you have a good holiday.

When this kickstarter looked to be stagnating at around a quarter funding, half-way through I suspected it wouldn't acheive its target. I'm sure there were a host of reasons for this (the main one imo probably being the price of the basic set at 92 Euros not being attractive enough) but here's the official word from the Creator, "Escenarys", a week before the official end date:

"Hello to everyone.
We've got bad news and good news. We have to cancel the Gladiatoris crowdfunding campaign, but we will relaunch the project! This is not a final goodbye, but merely a tactical retreat, in order to improve and try again.
It's easy to see that the campaign is not going to reach its funding goal. We have made mistakes that we need to address to make Gladiatoris a successful project. Fortunately, we have learned a great deal about a lot of things we didn't know before starting the campaign- most of them thanks to the advice, suggestions and comments from our backers. During Gladiatoris' seven years of playtesting, we have listened to what our players said to us; the game has changed as a result, and we have never regretted it. We want to do the same thing in this new phase of our project.
Now it's time for some decision-making on many important issues, and we can't give you a date yet for the return of Gladiatoris. To keep updated on the state of the project, several options are available:
- Join our friend list on our website. When the campaign is relaunched, we will e-mail all of them; if you don't want to miss your chance, this is the best way!
- Follow us on Facebook, Twitter and BGG; we will post development notices there.
- Check out our website; we will also regularly post updates in it.
We won't stop working. You have given us wonderful advice, from how to face the campaign to details about the miniatures. It's very important for us having found so many people interested in our game, supporting us in so many ways. We have said it many times, but we will say it again: if not for this kind of support, we would have given up many years ago. Thank you!
About the Print&Play and the last 24 hours of the campaign
But there are more good news! Far from this being the end of Gladiatoris: we will send all backers the Print&Play we were going to give you when funded. We can't give you an exact date yet, because some things are harder without funding ;) but we will send it as soon as we can.
That's the reason why we have not cancelled yet the Kickstarter campaign: if you know anyone who didn't know whether to participate or not, please encourage them to! We will leave the campaign open for another 24 hours, and we will send the Print&Play to whoever decides to support the campaign as a symbolic gesture on its last day.
We recommend you again to join our friends list, in case there is any technical problem with Kickstarter.
Thanks
We don't want to say goodbye (for the moment) without a mention to all who have supported us.
First of all and above everyone else, we want to thank our backers. Without you this wouldn't be possible, and we're not exaggerating when saying that your ideas and suggestions will be essential for the success of the future Gladiatoris campaign; please keep sending them through our social media.
Second, we thank our artists, who have given Gladiatoris an absolutely amazing look, far beyond our initial expectations. We are very happy for having gathered an art team with such a professional ability. You can look at their work here: Manzanedo, 3DBreed, Jaime González.
Third, we want to mention our history expert, Alfonso Mañas. It is because of him that we can proudly say that Gladiatoris is without a doubt the most historically accurate gladiators game there is. His extensive knowledge, his attention to detail and his enthusiasm with the project have given Gladiatoris and its components (especially its miniatures and illustrations) a historical feel very difficult to find among miniatures board games. We strongly recommend his educational book “Gladiadores: el gran espectáculo de Roma” (“Gladiators: the great Roman spectacle”; Ariel, Barcelona 2013) to all of you who are interested in the subject.
Lastly, we don't want to forget to thank Tinieblas González, who shot and edited our English Gameplay video; Kevin Barber, Jennifer Ho and Paul Ang for taking part in it; Emeral Knights, the store that became our "operational base" in California; all the media that helped us spread the word, from JueGorrinos (who gave us that wonderful couple Spanish videos, and who are great Gladiatoris fans now), MiCabezaFriki (who has "watched over" us from the start), Turno Cu4tro and Rincón de Jugones (who invited us to their podcasts), BackerKit (who included us in its digest as a project to keep an eye on), and a lot of board game geeks and friends that helped us one way or another during the play testing, with the campaign videos, etc.
Once again, thank you so much. Remember this is not a "goodbye" but just a "see you later". You will hear again about us, and not only when receiving the Print&Play. Don't forget to join the friend list and... see you on the Arena!"

So that they say, is that, but not quite - as I fully expect this particular kickstarter to re-emerge sometime in 2017. Having waited some 5 years since I first heard f this to come to fruition, another one isn't  that big a deal in he great scheme of things imo. (It's been seven years since the start of this great journey for the creators)

Just in case you've managed to read this far and were wondering what the heck the two photographs of the Gladiator were doing here (they're in no way connected to "Gladiaotiris btw, save thematically)
it's a figure I picked up from "Poundland"- about 90mm tall, though I had hope it would have turned out a little smaller. I did think at the time he would be suitable as a stand-in for "Theoceles" - the giant, but I'm having second thought as in scale he would be nine feet tall!

That's it then for this week, my first Kickstarter cancelled!
(but I do have the print n play stuff to look forward to, which I'll no doubt post about sometime in the future!)

Whilst I may not have had the opportunity or enthusiasm to paint anything more, or even complete the last dozen figures I started, I have spent a lot of time reviewing the various incarnations of the Avalon Hill (the ones I currently base my Gladiator fights on) and specifically their beast rules.
The original rules didn't have animal fights but a later supplement did add five 'beast' types, namely , Tigers,  Lions, Bears and wolves. (Models of the latter in 54mm have been particularly difficult to source.
I never found the rules that were included in the supplement very serviceable even though they seemed on the surface to be serviceable. There are two forms that rules with beasts can take, firstly  randomised beast actions and secondly player controlled beasts.


The first option lead to some very frustrating 'test' games as it was was net to impossible for the
Gladiators to have even the slightest inkling what the beast would do.
The second option, having a player control the beast led to an equally frustrating situation as the beast's main weapons (its size, strength, speed and manoeuvrability) made it a very tough opponent (read too tough).
The prolific George Mendoza developed "Gladiator,  Coliseum Edition" (found in the files section for "Gladiator" on Boargamegeek HERE) in many iterations adding another five animals (Boar, elephant, Gazelle, Rhino and Zebra) in the latest one, along with new rule ideas.
In these rules , animals  movement is once more random but the animals now behave in a way where they're far less likely to seek combat, can panic and generally try and avoid combat with their human opponents.
Whilst I haven't tried these rules,  I believe it'll once more led to a "Benny Hill" style chase as the animals panic off in a random direction and faster than the pursuing Gladiator.
My solution was to combine all these ideas together  and come up with a solution that gave the beasts some level of predictability., based on the position of the gladiator's position relative to the 'beast'.
Having tried just six zones for the target I found that they overlapped and consequently went for twelve zones, six being along the extensions of the beast front hex-sides and the six intervening zones (Letter and colour coded)
This gave me twelve target areas to which I could give various animal 'orders., move forward, to the right , pause (paws?), back off etc.
I decided to use the 11 outcomes of 2D6, with various outcomes, all  based on the single, simple idea that the beast wants firstly to face it's opponent and secondly it also wants (generally speaking) to attack its opponent - none of this running away nonsense for me (even though most likely beasts running away would be far more realistic).
Here's the table in its current state:

The table itself does look a bit of a beast too, especially all the abbreviations, but they're quickly learnt (and fairly obvious - e.g. FR - forward right)
The whole of the animal movement rules section of my rules is still being edited and revised but I think I'm getting there and I'm even considering separate movement tables for specific animals and of course they do need to be play-tested!

The news on the "Galdiatoris" Kickstarte (Here) is that it isn't looking good imo, but then again I really don't know how these things pan out. The kickstarter is currently at 25,597 Euros with a target of 80,000 euros with 22 days to go. It seems a bit bleak to me.

That's it then for this week, as always your comments are both welcomed and appreciated.