For the first two hundred years or so Gladiator combats were not fought in arenas, but were rather more improvised events in a market place or other suitable open public area. The seating arrangements for the spectators were purpose built for each event until sometime in the early first century AD when the first purpose built ampitheatres were built.
Any playing area could therefore be suitable to play a Gladiator game on but of course everyone wants their own arena to fight and I'm no exception!

The commerical arenas available are fairly few and far between, but what few there are, are very good. The Barszo arena above is for 54mm gladiators (of which they make a mere two !) but can also be extended into a circus for chariot racing. However at a wopping $400+, plus postage costs, plus the extended waiting list makes this an implausable choice for many I suspect. The spectators too are rather expensive at about $20 for eleven of them which makes purchasing any significant number prohibitive too (at least for my slim means).
The Marx Toys' arena is no longer in production I believe, but was re-released a few years ago and it can still be found occassionally on e-bay and similar sites.
I think the Marx figures are 60mm in height but the arena would be suitable for both 54mm figures and for the smaller scales of 25mms and 28mms.
There are many extras with the Marx arena, food vendors, spectators and chariots as well as some dubious looking gladiators!

A very suitable arena for the smaller scale gladiators can be purchased from Steve Barber, but is another rather expensive purchase at about £160.
There are also all the extras that you could wish for too (all at an extra price too of course) 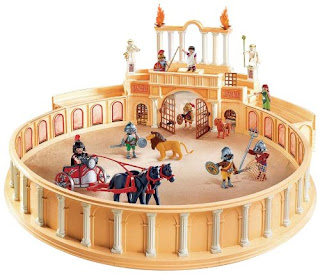 There are few other alternative choices for commercial arenas, but instead of going down the 'model' route I opted to go down the 'toy' route for my arena and like many others I opted for a 'Playmobil'
This model is also not currently in production but is regularly available on ebay etc.
The price of course varies from around £20-£40 plus postage. It is a very large model and would fit 'comfortably' on a three foot square table, with just inches to spare!
I've seen a few other Playmobil arenas converted for play with both 54mm figures and their smaller 25-28mm brethren. With the smaller figures the arena looks vast and fits with 54mm figures perfectly for my purposes. 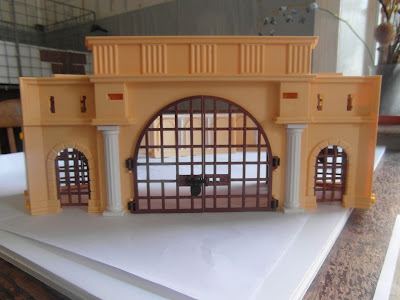 It does have its drawbacks though as it is a toy and has 'play features' that may need dealing with. If the 'stickers' have been applied to it then they'll need removing, which can be a pain (but remember White Spirit is your friend) and as it has gaps and strange cavities probably due to its moulding requirements.
The photograph on the right shows the model without the 'stickers' covering the moulding holes and there are a few other similar problems that have to be dealt with too.

I'll be showing what I've done with my version next time.